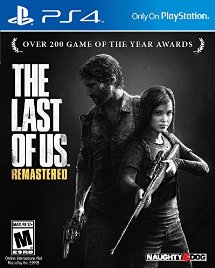 Winner of over 200 game of the year awards, The Last of Us has been remastered for the PlayStation4. Now featuring higher resolution character models, improved shadows and lighting, in addition to several other gameplay improvements.Abandoned cities reclaimed by nature. A population decimated by a modern plague. Survivors are killing each other for food, weapons whatever they can get their hands on. Joel, a brutal survivor, and Ellie, a brave young teenage girl who is wise beyond her years, must work together if they hope to survive their journey across the US.The Last of Us: Remastered includes the Abandoned Territories Map Pack, Reclaimed Territories Map Pack, and the critically acclaimed The Last of Us: Left Behind Single Player campaign which combines themes of survival, loyalty, and love with tense, survival-action gameplay.1 playerNetwork Players 2-845MB minimum save size1080p HD Video Output Software subject to license (us.playstation.com/softwarelicense). Online activity subject to Terms of Services and User Agreement (www.playstationnetwork.com/terms-of-service). One-time license fee for play on account?s designated primary PS4? system and other PS4? systems when signed in with that account.2013 Sony Computer Entertainment America LLC. The Last of Us is a trademark of Sony Computer Entertainment America LLC. Created and developed by Naughty Dog, Inc.