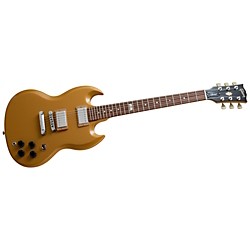 Good deal on a good guitar. From the site:Link

The Gibson 2014 SG Special Electric Guitar celebrates Gibson’s 120th Anniversary in style. It has a solid mahogany body and a maple neck with a ’60s slim profile. The 24-fret rosewood fingerboard has trapezoid inlays and sports a 120th Anniversary banner at the 12th fret. The headstock has “2014” on the back and a “Special” truss-rod cover to commemorate the anniversary year.