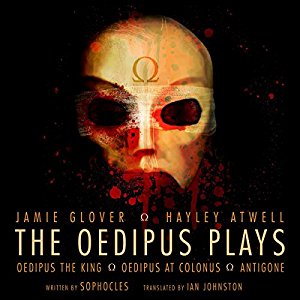 Length: 5 hrs and 8 minsThe three Theban plays by Sophocles – Oedipus the King, Oedipus at Colonus and Antigone – are one of the great landmarks of Western theatre. They tell the story of Oedipus, King of Thebes, who was destined to suffer a terrible fate – to kill his father, marry his mother, and beget children of the incestuous union. He does this unknowingly but still has to suffer terrible consequences, which also tragically affect the next generation.These three plays were written around 450 BC, with the playwright following the established convention of presenting the story through main characters but using a chorus – sometimes one voice, sometimes more – as an independent commentator that also occasionally participates in the drama. When the audiences of ancient Athens went to the amphitheatres to see the plays, they would have known the basic story of poor Oedipus.Nevertheless, the power of Sophocles’ retelling made the Theban plays deeply horrifying and affecting – and this is still true now, some 2,500 years later. There is also a strong contemporary resonance for us, for in the 20th century the psychoanalyst Sigmund Freud famously adopted the story to illustrate his Oedipus complex, which, he argued, was a condition of the unconscious mind in boys – that they want to sleep with their mothers. It is interesting that through the character of the queen, Jocasta, in Oedipus the King, Sophocles states this unequivocally.Oedipus the King is well known. The other two are less so: Oedipus at Colonus, which deals with his last days, and Antigone, which casts the spotlight on his daughter, who, as part of the accursed blood line, chooses to act in a way she believes is right, whatever the consequences. Yet they are equally powerful and moving.This audio production, with Jamie Glover as Oedipus and Hayley Atwell as his daughter, Antigone, is a world premiere audio recording of all three plays.With the authoritative but modern translation by Ian Johnston, specially commissioned new music from the English composer Roger Marsh, and a cast of outstanding actors, this Audible Original presentation of Sophocles’ Theban plays will be listened to not once but many times.